The Anvil is a place located on Dragon Mountain in Shadow Warrior 2.

The Anvil was built by Smith Masamune in old abandoned mechanic shop. There he built a new forge and started to do small mechanical services for supplies Later, Smith opened a dojo and started to bring young adults from the streets into the Anvil where he trained them and kept them from joining Yakuza.

Eventually, the Anvil was attacked by ZillaCorps, who killed Smith. By the end of the game, Hideo took the mantle as keeper of the Anvil.

In the game, the location serves as primary place where Lo Wang will get missions from Smith. 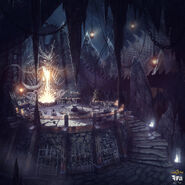