"The pinnacle of Zilla's Chi-tana experiments. An elegant weapon for an entirely uncivilized age."
—In-game description.

The Arm of Orochi is a melee weapon appearing in Shadow Warrior 2.

The Arm of Orochi is given to you by Orochi Zilla for the final battle against Ameonna at the conclusion of the quest Violent Takeover. It is one of the most powerful melee weapons in the game.

The Arm of Orochi is the only melee weapon in the game that can use the Force Slash on attack without requiring plasma ammunition like other such weapons, much like the completed Nobitsura Kage did in the first game. This makes it an ideal weapon for melee builds to use against the final boss. 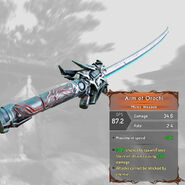 Arm of Orochi (Reflect light)
Add a photo to this gallery
Retrieved from "https://shadowwarrior.fandom.com/wiki/Arm_of_Orochi?oldid=13617"
Community content is available under CC-BY-SA unless otherwise noted.