"Little is known about the origin of this sword. Scholars studying demon linguistics have only been able to translate a single word of the engravings on its blade, the word 'Hoji'."
—In-game description.

The Blade of Exile is a melee weapon that appears in Shadow Warrior 2.

The Blade of Exile is a huge sword based on Hoji and left in the Shadow Realm. It can be found stuck in his grave in Ameonna's chamber, but it cannot be obtained until after the All in the Family quest. The sword was forged by Ameonna, and it was made out of Hoji's ashes.

The Blade of Exile, aside from its use as a melee weapon, is the only thing that can destroy the purple gates that bar your path after the battle with Ameonna's Acolytes. The blade bonus is really useful when wanting to get out of sticky situations. 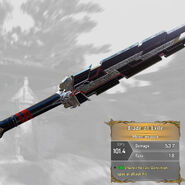 Blade of Exile on the altar

Blade of Exile concept art
Add a photo to this gallery
Retrieved from "https://shadowwarrior.fandom.com/wiki/Blade_of_Exile?oldid=13524"
Community content is available under CC-BY-SA unless otherwise noted.