"The rattle of demon bones you hear when firing this bad boy is a feature, not a bug."
—In-game description.

The Boner is automatic shotgun appearing in Shadow Warrior 2.

Can be bought from Larry after the mission Body Shaking. The weapon has a bonus that adds a 5.0% chance to restore 50% Fury on kill.

Pretty much the same as other automatic shotguns, with one important caveat - Boner comes with proprietary electricity mod.

It`s removable, but there is little reason to do so - good rate of fire and spread plus some additional mods to improve chances of electrocution make Boner an efficient crowd control tool. 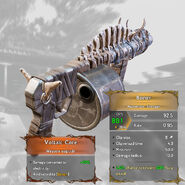 Boner in the game
Add a photo to this gallery
Retrieved from "https://shadowwarrior.fandom.com/wiki/Boner?oldid=13122"
Community content is available under CC-BY-SA unless otherwise noted.