"They say the Prince of Peace was a simple carpenter. With access to nailguns, we'd like to think he'd have been the Duke of Destruction."
—In-game description.

The DeVolt is a nail gun appearing in Shadow Warrior 2.

DeVolt is an automatic nailgun and it can be obtained early in the game as a reward for the first part of side mission Ninja'd Scrolls.

While DeVolt can equip some interesting mods as a projectile weapon, it`s low damage per shot makes it unattractive option in either case. Equipping it with multiple frangible ammo mods to stick enemies with literally hundreds of nails might be amusing, but combat performance will remain lackluster to put it mildly. 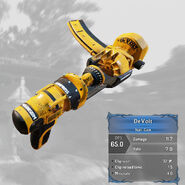 Ditto
Add a photo to this gallery
Retrieved from "https://shadowwarrior.fandom.com/wiki/DeVolt?oldid=13214"
Community content is available under CC-BY-SA unless otherwise noted.