Deck-ARD is a Revolver that appears in Shadow Warrior 2.

Likely the first example of chi-tech firearm the player will get their hands on, Deck-ARD is a viable alternative to Devolver Anaconda if player prefers futuristic looks.

It can be procured as a drop from Captain Akimbo during second story mission My Hero.

Deck-ARD has slight advantage in clip size and slight disadvantage in damage per shot over Devolver Anaconda but otherwise handles exactly the same. 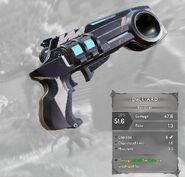 Ditto
Add a photo to this gallery
Retrieved from "https://shadowwarrior.fandom.com/wiki/Deck-ARD?oldid=14300"
Community content is available under CC-BY-SA unless otherwise noted.