"Scientists don't know why living tissue weapons improve Chi flow, all they know is it does. And that they were going to invent something called a 'flesh rocket' anyway."
—In-game description.

The Destroyer of Realms is rocket launcher appearing in Shadow Warrior 2.

Drops from Devouring Kamiko during the mission Body Shaking.

The weapon bonus increases movement speed by 20% for 10 seconds after a single kill.

High-end rocket launcher. Highest damage out of box, and with wise modification, it will remain unparalleled dispenser of caustic pain all the way to the end of game. Comes with removable proprietary acid mod.

Bonus movement really helps when this launcher is used against the crowd of small enemies - even if the blast doesn't get all of them, burst of speed allows to put the necessary distance between yourself and remnants to reload unmolested or switch over to something else to mop up the survivors. 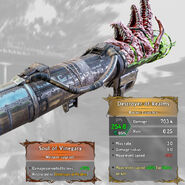 Destroyer of Realms stats
Add a photo to this gallery
Retrieved from "https://shadowwarrior.fandom.com/wiki/Destroyer_of_Realms?oldid=13097"
Community content is available under CC-BY-SA unless otherwise noted.