"As Nikola Tesla said, 'Our virtues and our failings are inseparable'. If Tesla's failing was being homicidal maniac, this wrist-mounted electricity lance would have been his virtue."
—In-game description.

Chi +3.8% per second of continuous fire

The Emperor's Touch is a special power gauntlet appearing in Shadow Warrior 2.

A drop from miniboss Unit-64 Commodore in the third part of side mission Ninja'd Scrolls. Can be easy to miss, since miniboss encounter is not a specific requirement of the mission and might involve some aimless wondering or dedicated searching.

Has proprietary electric element mod that can NOT be removed.

Electricity arc emitted by this glove is not particularly far-reaching or well-aimed, but up close it`s a good crowd controller. As it`s electric in nature, trying to use it on electricity-resistant enemies is not the best idea. However, if the crowd is not predominantly resistant to electricity, it will still serve you well.

Unlike some of the other weapons with proprietary elemental mod, Emperor`s Touch can NOT be switched to another element. It`s always electrical. Plan your modding strategy accordingly. 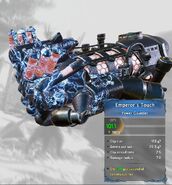 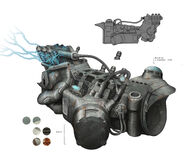 Emperor's Touch concept art
Add a photo to this gallery
Retrieved from "https://shadowwarrior.fandom.com/wiki/Emperor%27s_Touch?oldid=14325"
Community content is available under CC-BY-SA unless otherwise noted.