Evil Ninjas are the most common enemy type in the game and serve as the primary foot soldier for Zilla. They are shirtless humanoid demons with pale skin and muscular bodies with some blood bruises on their upper body halves. Their hair are tied in a samurai-styled ponytail. They eyes glow bright red and mouth is full of pointy teeth. They visually differ only on the color of pants and tabi boots they wear; the Shadow variant is exactly the same, except it appears entirely as semi-translucent black.

Evil Ninjas can be sliced in half with the sword 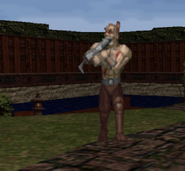