"When you don't know how to say it, say it with a plasma grenade launcher."
—In-game description.

The Fujin is grenade launcher appearing in Shadow Warrior 2.

Once again, Fujin is a chi-tech counterpart to One-Trick Pony, with electric element proprietary mod. It can be gained during the story mission Big Trouble in Calamity from a miniboss encounter with ST-RC1 Titan (souped-up Scorpidroid).

Fujin is a one-shot grenade launcher, and it`s best use as an opening shot or from an ambush. Or against singular boss enemy, when there is enough space to strafe around while reloading.

While it can be used to soften up a crowd of small enemies, switching to quick-firing weapon, vanishing or simply running away right after landing a shot is a good idea, as the reload sequence takes a while. 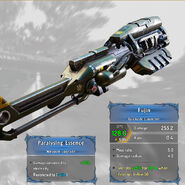 Fujin stats
Add a photo to this gallery
Retrieved from "https://shadowwarrior.fandom.com/wiki/Fujin?oldid=13091"
Community content is available under CC-BY-SA unless otherwise noted.