"Why the name? Well, it fires constant stream of Chi-plasma infused grenades. Also he's not keen on humans."
—In-game description.

The Genocider is automatic grenade launcher appearing in Shadow Warrior 2.

Genocider can be obtained as a reward for mission Industrial Espionage or bought from Larry immediately afterwards if different reward was picked.

It has an electrical proprietary mod.

Genocider uses plasma, which at this point in the game is underused type of ammo. With a decent damage and rate of fire, Genocider is a comfortable crowd controller with better range then shotguns and other close-quarter weapons.

It has to be pointed out, however, that a singular blast from Genocider is not particularly impactful, so when you pull this gun out, better plan to empty the clip. Of interest is the fact that Genocider is in fact a multibarreled gun and therefore will accept the multishot mods, which can drastically up it`s damage output at the cost of increased ammo expenditure. 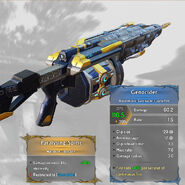 Genocider stats
Add a photo to this gallery
Retrieved from "https://shadowwarrior.fandom.com/wiki/Genocider?oldid=12991"
Community content is available under CC-BY-SA unless otherwise noted.