"This weapon is said to be carved from the same material as Ancients' battle suits by the same maker. Kids these days will believe anything."
—In-game description.

The Ghidorah is a melee weapon appearing in Shadow Warrior 2.

Ghidorah are a pair of combat shurikens that is one of the possible awards for completing third part of side mission Heisenberg. Otherwise it can be bought in Larry's Shoot Shack.

The bonuses increases critical chance by 10% and increases damage resistance by 30% for 15s on special attack kill. 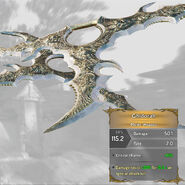 Ghidorah concept art
Add a photo to this gallery
Retrieved from "https://shadowwarrior.fandom.com/wiki/Ghidorah?oldid=14324"
Community content is available under CC-BY-SA unless otherwise noted.