For weapon used by Gozu, that can be obtained in Shadow Warrior 2 DLC "Way of the Wang", see Fist of Gozu.

Gozu is one of the Ancients, immortal shadow beings that rule over the Shadow Realm, that appears in Shadow Warrior (2013) and Shadow Warrior 2. He serves as the first boss Lo Wang fights.

As one of the Ancients, Gozu ruled over the Shadow Realm with his brothers. Gozu together with his brothers, under orders of Enra, separates Hoji and Ameonna after Enra finds out about their affair and then skins Hoji's face as punishment. After Xing, supposedly poisons Ameonna, as punishment for his actions and under orders of Enra, Gozu beheads Xing, which doesn't kill him because he's immortal but immobilizes him. After the Shadow Realm starts to wither away, Gozu sacrifices the memory of Ameonna for the Whisperer.

When Lo Wang comes to kill him, Gozu, now in his battle armor, fights with Lo Wang. After the boss battle, Lo Wang prevails and defeats Gozu. Hoji then absorbs his Ki.

Gozu appears as a gatekeeper to Ameonna's palace, sitting on a stool and wielding a powerful axe called the Fist of Gozu. After completing the first task from Ameonna, he can delegate Lo Wang to complete few missions:

After finding the truth about Oyabun, he moves near Ameonna. After she reveals her plans to destroy the Outer Gates and doomed the entire creation, he hits Lo Wang with his axe and disappears. When the cultists retrieve Kamiko's body and transport it to the Outer Gates, Gozu transfers Ameonna's souls into the body, transforming her into a hideous spider-like abomination. Gozu isn't seen after Ameonna is defeated and his whereabouts are unknown.

Before meeting Ameonna, Gozu believed himself as eternal and beyond change. He was cold and strictly followed orders. When he met Ameonna for the first time, she looked at Gozu's eyes, looking for pity. To his amazement, she almost found it. In his memory, Gozu recalls, that the memory of that meeting haunted him for the rest of his life. He started to think that maybe after all he can change. After Ameonna was poisoned, Gozu felt regret that he couldn't stop Xing. By time he gives up his memory of sister, he expresses that Ameonna was the only thing he ever loved.

In Shadow Warrior 2, Gozu become the most loyal and faithful follower of Ameonna. This borders on obsession as he can't even leave Ameonna's side to do his tasks, leaving Lo Wang to do them instead.

Gozu had red skin with dark red tattoos on the chest. Two small horns are coming out of his head. He wears blue pants, tied with tick rope. He carries around a big axe and on his left arm, he wears a blue hand guard. His battle armor is bulky with red cracks running down his visible body. His helmet is fashioned after a bull and he carries around a huge axe.

In the sequel, Gozu looks exactly the same like in his flashbacks in Shadow Warrior (2013).

In his boss fight, Gozu utilizes directional, ground wave attacks and heat lasers from his eyes. He can kill Lo Wang, if he directly hits him with an axe. If his axe holding hand is destroyed, Gozu primarily uses ground smash AOE attacks and heat lasers. When his health becomes low, Gozu starts charging at Lo Wang. Good strategy is destroy his arm wielding the axe first as it gets rid of one hit kills on Lo Wang, makes Gozu use ranged attacks a lot more and makes him more predictable with his attacks. 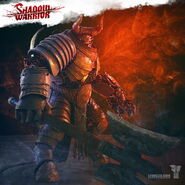 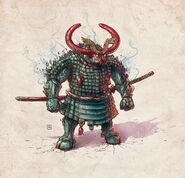