"Hammerhead isn't the sharpest tool in the box. That's why he carries a sword."
—In-game description.

Hammerheads are low-ranking demons encountered most frequently in the early game. They appear to be former humans mutated by Shade.

There is a Champion variant of this enemy - Vicious Sentinel, which player may meet in quest "Chi-ters".

Hammerheads are humanoid demons clad in leather armor and armed with large blades. They have pink skin and eyeless, noseless faces. Their most distinguishing feature are the large hornlike protrusions sprouting from the sides of their head, the source of their name.

Hammerheads are fairly weak and will generally go down in a couple of slices from a melee weapon. They usually attack with their blade but will also use an electrical attack at close range, making them easy to deal with at a distance. They are fairly fast, however, and can close the distance faster than most demons by jumping large heights. They can generally be dealt with using any weapon due to their low health and low damage potential. 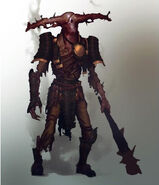