One of the more unique weapons in the Lo Wang's arsenal, the Guardian Head is literally a head from one of the Guardians, either found as a weapon or found after killing a Guardian. The Guardian Head has only 80 charges, which can't be recharged with other Guardian Heads. It has 3 fire modes, which are selectable by inserting fingers into different holes in the back of his fractured skull.

Default: The first fire mode uses 1 charge per shot but at a fast rate. This default mode fires accurate and highly damaging fireballs in rapid succession. They can set enemies on fire if aimed at either the ground or at flesh. This mode is indicated by Wang sticking his index finger into heads brain.

Second: In the second mode, Wang sticks his middle finger into its head (making devil-horns) and a circle of fireballs surround him when used. Any enemy that touches fireballs instantly get sets on fire or dies. The fireballs can go through walls but only last for a few seconds using 10 charges in the process.

The head weapon returns in the reboot, now dropping from Warlords after unlocking the Headhunter perk. Differently from Guardian Head, the Warlord Head only has one firing mode, a yellow laser.

Because of it's limited ammunition and high fire rate, it's best to use Guardian Head for clearing out big groups of enemies or when fighting bosses. Is better to focus on the default and third firing modes, because of seconds high ammunition consumption and limited effectiveness.

Warlord Head is only effective when facing lesser demons, like Crawlers, Birdman or Mothers. The weapon is best for short to medium fights. 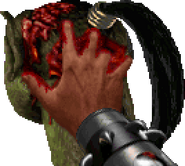