Hung Lo is the twin brother of Lo Wang and the main antagonist of Shadow Warrior first expansion, Twin Dragon.

At the time Lo Wang was delivered into the world, he was not alone. Lo Wang's mother was blessed with twin baby boys. Unfortunately, due to the fact that his mother was unwed, she gave them both up for adoption. Lo Wang's new family was only able to afford to raise one child, therefore, his brother was adopted by another family. His brother, Hung Lo, was adopted and raised by the evil overlord Pu Tang. Pu Tang was an evil man, and raised Hung Lo as a diciple of evil, and taught him about the dark side of Ninja fighting.

Once Hung Lo reached maturity, Pu Tang died, but before his last breath, Pu Tang passed his evil soul into Hung Lo. Hung Lo took control of the oriental underground, the undead, the spirits and demons who would perform the deeds for his evil ways. He had the power to someday control the world, and decided to infiltrate the key cities of the world to empower himself as the ultimate crime lord for his evil empire.

Hung Lo sends his forces to kill Lo Wang. Ultimately, he is killed by his brother, Lo Wang after he fires a Nuclear missile at him killing Hung Lo in the process.

Just like Zilla, Hung Lo was a power hungry psychopath. Differently from Zilla, who wanted to take over only Japan, Hung Lo wanted to destroy entire world. He seems to be obsessed with killing Lo Wang, saying that there can only be one.

Hung Lo has long dark hair tied in a ponytail. He's extremely tall and wears a red vest with black pants. He has a mini gun attached to his right arm and a rocket launcher on his shoulder.

Just like in Zilla's boss fight, Hung Lo primarily uses his rocket launcher for ranged attacks. For up close attacks, he uses his mini-gun. Also, Red Ninjas accompany him. The best way to take him out quickly is to shoot a Nuke at Hung Lo, followed by multiple shots from rocket launcher.

Hung Lo moments before his death

Hung Lo death by the Nuke 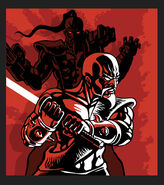