"What looks like intricate carving on this weapon is actually twelve trapped demons howling for souls to devour. Not kidding."
—In-game description.

The Jigoku is a pistol appearing in Shadow Warrior 2.

A possible reward for finishing side mission Heisenberg. Other choice is Ghidorah. The gun bonus restore 1.0% of Fury on each hit.

Not much to say. Use it as a pistol it is. It is pretty average in all regards. If it showed up in the first third of the game, it could`ve been a pistol that sees decent use, but it`s pretty much a given that by time player obtains this, The Triad is already available for use.

With dual-wield and explosive ammo mods this weapon has a place in endgame Fury based builds as a method of quickly regenerating Fury. 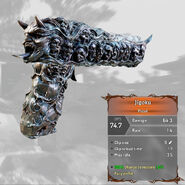 Model
Add a photo to this gallery
Retrieved from "https://shadowwarrior.fandom.com/wiki/Jigoku?oldid=13564"
Community content is available under CC-BY-SA unless otherwise noted.