"Post-Collision life saw an increase in both hunting and being-hunted. Which led to a rise in amateur gunsmiths and homegrown technology. Nothing says 'stay down' better than an artisanal taser attached to a bespoke arrow. Where's your housemade tarragon reduction now?"
—In-game description.

The Judgement of Enra is a gauss rifle appearing in Shadow Warrior 2.

Can be found in an immediate vicinity of Mezu during story mission Seepage Problem, in the book corner under the ladder.

Judgement of Enra is an efficient but finicky weapon. While it`s ostensibly not elemental without mods, the projectiles it shoots will lodge into enemy and then cause electrical damage after a delay. This pause in damage allocation makes weapon problematic to use as a run and gun weapon.

One good tactic with this gun is to make liberal use of vanishing technique - pop up, hit two (or four, if you lucked out and loaded the double clip) different enemies with it, then vanish for reloading and change of location. While you`re out of sight, the delayed damage will trigger and possibly remove the targeted enemies out of play outright - or at least make them easy pickings for a next volley or a follow up with another weapon.

Another (often overlooked) option lies with the fact that this gauss gun is actually two-barreled, which makes it possible to install a multishot mod. While doing this will make sniping a lackluster proposition, it allows for impressive ambushing attacks. Vanish is really helpful, if this path of upgrade have had been chosen. 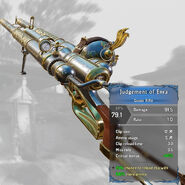 Judgement of Enra concept art
Add a photo to this gallery
Retrieved from "https://shadowwarrior.fandom.com/wiki/Judgement_of_Enra?oldid=11606"
Community content is available under CC-BY-SA unless otherwise noted.