"I like sword - that's a personal weapon."
—Lo Wang, when using katana in Shadow Warrior Classic.

The Katana Is one of the main weapons used in both Shadow Warrior Classic, its expansions Wanton Destruction and Twin Dragon, and the 2013 reboot. It is portrayed in a more vital way in the Shadow Warrior (2013) and Shadow Warrior 2.

In the Classic, katana is more of a secondary weapon, used only when being out or conserving ammo. It can only slice through lower Evil Ninjas, as other enemies after killed with katana will only show their default death animation.

In 2013 version, katana now has much more vital position in Lo Wang's arsenal. The blade combine with Ki attacks becomes a universal weapon fit to use against any enemy, even the bosses and flying creatures. The weapons descriptions states, that katana is made by fitting laser-whetted folded steel to a strong, yet lightweight carbon fiber handle.

Best to use for short range attacks and when conserving ammo. Can take out spawning Coolie ghosts.

Universal weapon fit to use against any enemy, except Mothers because of their suicidal explosions that deal a large amount of damage.

Katana upgrades are automatic in story mode, however in survival you must buy them as upgrades.

Ancient Tsuba: Adds a 5% chance of HP drain from enemies. 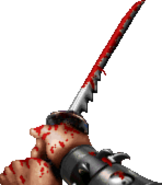 Excalibat (Rise of the Triads)