"This modern take on a triple-edged Haladie dagger is based on ancient Hindu and Syrian designs, but with extra Silicon Carbide."
—In-game description.

Kazaguruma is a melee weapon appearing in Shadow Warrior 2.

The Kazaguruma are close-range dual-wielded melee weapons capable of fast attacks. They resemble oversized tri-bladed shurikens, and are often spun when used in special attacks or when blocking.

They can be obtained as a reward for the first part of side mission Flirty Fishing or found as random drop afterwards.

Up close and personal. There`s little tangible difference between using these or any of the other handblades like Ripper or Ghidorah or any of the available claws. When using Force Slash these do not penetrate like most melee weapons, instead they will stick to enemies and spin doing minor damage. 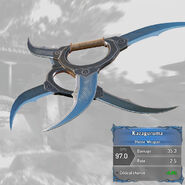