"Safety note: when you're done being a whirlwind maelstrom of death, take these off before using the restroom."
—In-game description.

Kuzuri is a melee weapon appearing in Shadow Warrior 2.

To get those claws, buy them off Hideo after finishing story mission Ancestral Ties.

Humor aside, there is nothing terribly specific about those to set them out of other short blades, they`re all-around average kind of metal implement of pain.

Use them if you like the aesthetics of it, otherwise... Collection notch. 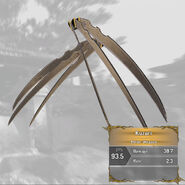