"Who wants some Wang?"
—Lo Wang's iconic quote in the series.

Lo Wang (Classic) is the main protagonist and player-controlled character in Shadow Warrior Classic and its expansions, Twin Dragon and Wanton Destruction.

Lo Wang worked as a bodyguard for Zilla Enterprises, a conglomerate that had power over every major industry in Japan. However, this led to corruption, and the president, Master Zilla, planned to conquer Japan using creatures from the "dark side". Having discovered this, Lo Wang quits his job as a bodyguard. Master Zilla realized that not having a warrior as powerful as Lo Wang would be dangerous, and sends his creatures after Lo Wang.

Later in the game, Lo finds that Zilla's men have slain his old master, whom he had sought out to help him. Following his master's dying words, Lo decides to avenge his death. After fighting through Zilla's army, Lo Wang manages to track Zilla to his secret base inside a volcano. There, he fights Zilla, who piloted a samurai-like war-mech. Lo defeats the mech, but before he can finish the job, Zilla escapes, promising a future encounter.

After the events of Shadow Warrior Classic, Lo Wang decides to visit his relatives in the USA. Zilla, still bitter after his defeat, uses this as a chance to kill Wang, and sends his forces after him. After defeating Zilla's forces once again, Wang faces off against Zilla, this time above the streets of Tokyo. The battle ends in Master Zilla's death. After the battle, Lo Wang returns to the USA. When he returns to his hotel room, Lo Wang finds an old lady waiting for him, after which it cuts to black (much to Wang's horror).

Lo Wang is meditating in his home, when evil forces attack him. It's revealed that they were sent by Wang's evil twin brother Hung Lo, who wants to destroy the entire world, as opposed to Zilla (Classic)'s plans of destroying Japan. Lo Wang goes through Hung's dark minions, reaches his palace, and fights the evil Twin Dragon Hung Lo. Lo Wang kills Hung Lo with a Nuke.

In classic, Lo Wang is an elderly but muscular and athletic-built Asian man in his apparent 60s. He is bald and shirtless, sporting a thin white moustache and long goatee in Fu Manchu style. He wears blue pants and wrist adornments (with metal grapplers which allow to vertically climb solid surfaces, Spiderman-style, though this never happens in-game), black tabi boots, and a brown furry "bandolier" which goes diagonally from his left shoulder to the right side of his waistline and allows his ever-present sword to be sheated on his back (and pulled from over his right shoulder). He also has a huge green dragon tattoo which takes his entire upper body half.

In the classic game, Lo Wang is a typical old Eastern ninja master: he is completely fearless and headstrong, meeting battles head-on instead of running away from it, and also possesses a strong moral compass, as he left Zilla when it became corrupted by darkness and schemed to take Japan over, in honor of his ancestors. Wang counterbalances his honored and serious life with his silver tongue: he is an active pervert who cracks stupid jokes and likes to peep into females, especially young ones.

Lo Wang doesn't have a specific origin. His behavior is made up mainly of a mix of Chinese and Japanese stereotypes. His name Lo Wang is a joke that refers to male genitalia. More examples:[1] 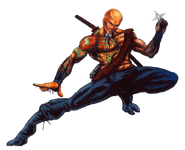