"This is what happens when people get halfway through making a biotech weapon and throw it out. This feral chainsaw was found in wilderness, living off the very demons it absorbed into it's bodily structure. Paging Dr. Moreau!"
—In-game description.

The Lumberjack's Caress is a special chainsaw appearing in Shadow Warrior 2.

Lumberjack's Caress has the highest DPS out of all chainsaws in the game. The weapon gives 10% bonus to damage resistance and will restore 0.1% Fury on every hit.

The weapon can be unlocked during the mission All in the Family. If Cerberus is chosen as the reward instead of Lumberjack's Caress, the weapon will appear as reward in Stop the Ooze.

The chainsaw works best for close range fights. While the weapon does decrease the movement speed, the 10% damage resistance off-sets the drawback.

Unlike Warrrsaw!, it`s inherent bonuses are better lending themselves to a boss-killer role. With proper caution, this handy dandy demonic hardware can carry you through any melee miniboss fight. Just don`t whip it out in brawls where you need to move around a lot. 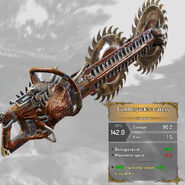 Ditto
Add a photo to this gallery
Retrieved from "https://shadowwarrior.fandom.com/wiki/Lumberjack%27s_Caress?oldid=13169"
Community content is available under CC-BY-SA unless otherwise noted.