The Major Fletcher is a sawed-off shotgun appearing in Shadow Warrior 2.

Larry sells it after Big Trouble in Calamity. The exact contents of shop are somewhat randomized, so visiting Larry several times between side missions or resetting the shop stock for zillyen might be necessary before this gun becomes available.

The weapon bonus gives 30% chance to reload a clip with 50% more ammo.

It`s a shotgun. On the first glance, it`s stats don`t seem all that hot, but it has an advantage of using plasma ammunition. That gives Major Fletcher unexpected reserve of staying power, as plasma pool is much bigger then shotgun shell one. (400/4 = 100 shots via plasma, as opposed to 60 shotgun shells if neither pool is upgraded. Since both upgrade options add 50% max, even maxed out shotgun shell cap is merely 90.)

So, if you expect a long haul, pick up this shotgun for the road, and you just might outlast your enemies. Since it`s technically a sawed-off two-barreled shotgun, it does accept charge shot and multibarrel shot mods (either-or, sadly), if you prefer to shoot less often but harder.

A convenient companion for a shotgun-focused player due to using different pool of ammunition. Between it, The Purgator and whichever conventional ammo shotguns player favors the most, there will never be a shortage of shrapnel flying in the general direction of any hostile intentions. 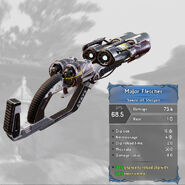 Ditto
Add a photo to this gallery
Retrieved from "https://shadowwarrior.fandom.com/wiki/Major_Fletcher?oldid=14298"
Community content is available under CC-BY-SA unless otherwise noted.