"This is what you get when you let retro-futurist hipsters into a weapons lab. Looks like Flash Gordon, punches like Jack Dempsey."
—In-game description.

30% chance to change target into rabbit on critical hit

The Marvin is a pistol appearing in Shadow Warrior 2.

Obtaining this is as simple as buying it off Larry. The gun goes on the shelf after completion of Big Trouble in Calamity, though not consistently - sometimes it appears after Ancetral Ties.

Con: Plasma blasts are much slower then bullets.

End verdict? Spam it. Dual-wielding mod might come in handy. 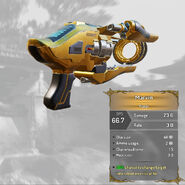 Marvin stats
Add a photo to this gallery
Retrieved from "https://shadowwarrior.fandom.com/wiki/Marvin?oldid=11856"
Community content is available under CC-BY-SA unless otherwise noted.