"You don't comprehend the forces you're dealing with. If it were not for me, the gates would have opened that day. Humanity would have perished if not for my sacrifice."
"Oh right. You're secretly a good guy. Slipped my mind."
—Mezu to Lo Wang.

Mezu is the guardian of the Outer Gates and one of the Ancients, immortal demon beings ruling over the Shadow Realm, which appears in Shadow Warrior (2013). He's the second boss Lo Wang fights. He becomes a supporting character in Shadow Warrior 2.

Mezu ruled the Shadow Realm with his brothers under guidance of Enra. For centuries, they fought against forces of chaos, who wanted to destroy the Shadow Realm. Eventually, Xing and his demon army manages to push the chaos forces into the void.

In order to prevent them from invading their realm ever again, his brother, Hoji was hired to create a set of gates to seal them off. They then used the soul of their sister, Ameonna to seal the gates. But they still relied on the power of chaos by using Ameonna's tears to fuel their realm and their own desires.

After Enra found out of Hoji's and Ameonna affair, Mezu together with his brothers, under orders of Enra, separate the pair and skins Hoji's face as punishment. Later, after finding out about the plot to overthrow Enra by Xing and Hoji, Mezu interferes and stops the plot. Like other brothers, Mezu sacrifices his memory of his sister to fuel a Whisperer. Mezu is then charged to protect the Outer Gates by Enra.

After Lo Wang reaches the Outer Gates and starts breaking the seals, Mezu as the guardian of the gates, fights him. In the end, Lo Wang manages to defeat Mezu and Hoji absorbs his Ki.

Lo Wang's actions causes the Shadow Realm to violently merge with Earth. Although much of Shadow Realm are emerge on the Earth realm, Mezu uses his armor to close the gates and prevent the destruction of both realms. Realizing, that his armor won't hold the gates closed forever, Mezu seeks out a way to completely shut them off.

Knowing that the only way to close the gates is through a sacrifice made by an Ancient, he makes a contact with Mamushi Helka. Mezu offers Helka incredible power, which would solidify her position as the leader of Yakuza. In return, Mezu will conceive a child with her daughter, Kazuko. Having no other choice, Mamushi agrees and Mezu rapes Kazuko. Soon after she births Kamiko and dies. Mezu decides to wait until Kamiko will be strong enough for the sacrifice and in the meantime, looks over the Outer Gates.

Mezu meets with Lo Wang when the latter is tasked by Mamushi to find the source of black goo in the wildlands. Wang is surprised to see Mezu here and gloats at his defeat, the last time they met. Mezu is disappointed that Lo Wang doesn't act like a grown man and shows little sympathy to his predicament Lo Wang questions him as to why he's still here. Mezu answers that he continues his duty as the guardian of the gates and if not for his sacrifice, humanity would have perished once the gates fully opened. Lo Wang doesn't believe him and leaves.

They meet again after Wang tries to track down Kamiko's father. Mezu questions Lo Wang why he has come to him again and the latter reveals, that he's looking for the Oyabun, the boss of Yakuza and intends to take a piece or few off him. Mezu doubts that the Oyabun will let that happen. When Wang mentions that Mamushi Helka might have betrayed the Oyabun, Mezu accidentally reveals his identity as the infamous Yakuza boss. Wang points out his despicable actions, but Mezu justify them as the greater good. He then leaves to the Mamushi's old office above the Laundry on Dragon Mountain, but not before warning Lo Wang, that Ameonna will betray him in the end.

Mezu warning comes true and having no one else to turn to, Lo Wang asks him for a favor. Mezu is at first reluctant to help him, but changes his mind, when Wang reveals, that Kamiko's soul is in his body. While Mezu scouts search for Kamiko's body through out Onishima, Mezu tasks Lo Wang with stopping Ameonna's priests from destabilizing the gates. Lo Wang accomplishes the task and Mezu explains, that if the gates are fully opened, the Shadow Realm and Earth realm will sucked together, bound forever in a chaotic morass without meaning, devoid of shadow and light. Xing then agrees to help them to locate the body, but first Lo Wang needs to free him from Zilla.

After Ameonna frees Kamiko's body and takes over it, Wang meets with Mezu near the gates. Mezu urges Lo Wang to subdue Ameonna and then administer Smith's cure. Once that is done, he will place Kamiko's soul back to her body and use her to seal the gates. Lo Wang manages to subdue Ameonna, but as Mezu tries to extract her, Wang kills the body. Kamiko suggests to sealing open the gates with her living soul. Mezu rejects this as utter nonsense, believing that Earth wouldn't survive this. Although Mezu refuses to be part of this plan, Xing decides to help her. She then flies to the gates, shattering them. Out of the gates, a giant dragon emerges and then swallows Lo Wang.

According to Lo Wang, after the Evildoing Dragon is released from the Outer Gates, it kills all the Ancients, including Mezu for trapping him and stealing his power.

Mezu is the most loyal of the brothers to Enra. Like, Gozu, he follows Enra's orders without questioning them. He feels spite to his sister Ameonna because even after stopping Xing's and Hoji's plot to overthrow Enra, Mezu wasn't let to see her. Unlike Enra, Mezu didn't see anything wrong with Hoji's created Whisperers.

His personality changes dramatically after coming to Earth. Mezu becomes obsessed with protecting the Outer Gates from the second Collision, even going as far as raping a woman so he could sacrifice the baby to seal the gates. He despises other humans and is extremely cold to his daughter Kamiko, seeing her only as a tool for his needs. In the end he encourage Kamiko to fulfill her destiny even though is not her fate.

Mezu utilizes ranged attacks and quick dashes to fight Lo Wang. He also can use an AOE ground smash after which his spear becomes stuck and open to attacks. Mezu is the only boss that doesn't persa have a weakness. His weakness is the fact that his hitbox (armor) is really easy to hit, since it's his body plate and than his wings, both of which is easy to hit. A good strategy is the moment after multiple seals need to be broken which means that Mezu wings become the next spot needed to hit and then land 3 rockets into his wing as he lands.

Mezu has light-red skin, long black hair and two short horns. He wears red cape, blue shirt and pants. His battle armor is in blue and golden. His helmet looks like horse head with a crescent head piece on the top of the head. He has dark wings and hoofs. He's weapon is a giant yari.

Besides now wearing a black suit, his design stays the same. 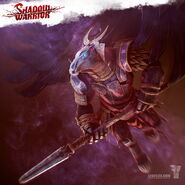