The Monsoon is automatic rocket launcher appearing in Shadow Warrior 2.

This rocket launcher can be obtained during story mission Industrial Espionage by killing miniboss Transistor ZL-260 (souped up ZL-Mechs). It might be easily missed due to the fact that miniboss battle is not a required part of mission and story missions are not replayable in free roam.

Boss fighting and crowd control weapon. Rockets are sparse, expensive and even with capacity upgrades, you can`t carry much with you. On the other hand, they pack a wallop.

Monsoon is actually rather lackluster in terms of damage as far as rocket launchers go, but it makes up for that partially with high fire rate and a clip that fits three rockets, while other launchers are strictly single-shot.

As a multibarrel weapon, Monsoon can accept a multibarrel shot mod, which will bring it`s single shot damage and overall performance on par with other launchers - albeit at a triple rocket expense per shot. On the plus side, firing three rockets at once does cover bigger area, so as a crowd control it might be a preferred option. 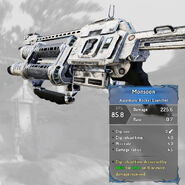 Model
Add a photo to this gallery
Retrieved from "https://shadowwarrior.fandom.com/wiki/Monsoon?oldid=13099"
Community content is available under CC-BY-SA unless otherwise noted.