"The One Trick Pony has one trick. It's a pretty good trick."
—In-game description.

The One-Trick Pony is grenade launcher appearing in Shadow Warrior 2.

Can be bought from Larry early in the game, after completing one or two side missions.

The name says it all. It`s got one trick, but it`s a good one. One shot nature of this grenade launcher requires either retreating or switching to other weapon after each shot, but as an opening shot or from an ambush, it can really bring the hurt to enemy.

Use it so soften up the crowd before finishing them off with shotguns or melee, or use it as a boss-killer weapon, if you can do the circle-strafe well. Vanishing or simply using dash for hit and run tactics also works well, and the languid pace of use does help conserve the ammo.

Frangible ammo mod might seem like a good idea, but the decrease in damage makes it just not worth the effort. A sticking mod, on other hand, is extremely handy when using this as a boss killer.

While one can remove proprietary mod to switch this weapon to other element, it does have a good synergy with fire. 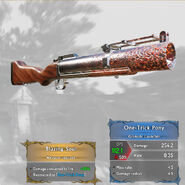 One-Trick Pony stats
Add a photo to this gallery
Retrieved from "https://shadowwarrior.fandom.com/wiki/One-Trick_Pony?oldid=13409"
Community content is available under CC-BY-SA unless otherwise noted.