"Affordable, portable and terrifying, this full-auto nailgun is state of the art in attaching your enemy to his own front door."
—In-game description.

The Perforator is a nail gun appearing in Shadow Warrior 2.

Perforator is second best nail gun in the game, only losing to Stapler. The gun has a 10% damage increase when zoomed.

Perforator can randomly drop from enemies or can be bought from Larry's Shoot Shack.

Because of 10% damage bonus when zoomed, Perforator works best for long range battles. While Stapler higher per-shot damage and the special effect which helps with ammo efficiency, Perforator has the highest fire rate and biggest clip out of the three nail guns. 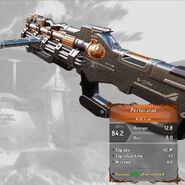 Perforator stats
Add a photo to this gallery
Retrieved from "https://shadowwarrior.fandom.com/wiki/Perforator?oldid=13215"
Community content is available under CC-BY-SA unless otherwise noted.