80% Damage converted into Force Slash when there is ammo

Can be bought from Hideo after fourth story mission Industrial Espionage. The weapon converts 80% of damage into a Force Slash when there is ammo.

Despite being classed as short blades, this is more of a ranged weaponry. The mechanic is already known to player from the Bladez of Zaibatsu acquired earlier, but Plasma Cutters are far more efficient at this. Moreso, on impact the blades seem to linger and do extra damage.

The rate at which those can be swung pretty much mandates using More Dakka with those. This is aided by the fact that plasma cutters use pretty generous and at this point in the game, likely underused energy ammo pool. 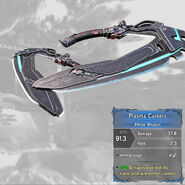 Plasma Cutters concept art
Add a photo to this gallery
Retrieved from "https://shadowwarrior.fandom.com/wiki/Plasma_Cutters?oldid=13387"
Community content is available under CC-BY-SA unless otherwise noted.