"Built for the unpredictability of the modern battlefield, this elegant and deadly rifle is the latest in Zilla Zaibatsu military tech. Chi-plasma-filled bullets for versatility, high rate of fire for crowd control."
—In-game description.

The Plasmoid is an assault rifle appearing in Shadow Warrior 2.

Drops from Eradicator boss in Stop the Propaganda side mission. The guns bonus increases the damage while zoomed.

Chi-tech assault plasma rifle. Jack of all trades, master of none. It`s decent at medium range, where it`s special bonus comes into play, and has the staying power due to sizeable clip and deep ammo pool, but it`s not terrific in any specific area. Pack it up if you need a default gun or a backup one. 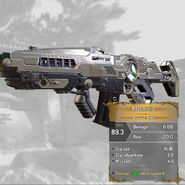 Plasmoid in the game
Add a photo to this gallery
Retrieved from "https://shadowwarrior.fandom.com/wiki/Plasmoid?oldid=13152"
Community content is available under CC-BY-SA unless otherwise noted.