The Point Five-O is a pistol appearing in Shadow Warrior 2.

A random drop from Yakuza troops and found in chests. Can be encountered as early as in Ninja'd Scrolls part two or The Cookery.

A step up from revolvers. It offers less damage, but twice the clip, making it a convenient tool to dispose of small gaggles of enemy. Depending on how early it is acquired, it`s usefulness ranges from "a good find" to "well, I do need it to complete collection". 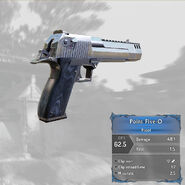 Point Five-O stats
Add a photo to this gallery
Retrieved from "https://shadowwarrior.fandom.com/wiki/Point_Five-O?oldid=12914"
Community content is available under CC-BY-SA unless otherwise noted.