"It's generally held that Raijin is the pinnacle of Zilla Zaibatsu's conventional weapons tech prior to Chi weapons."
—In-game description.

The Raijin is a gauss rifle appearing in Shadow Warrior 2.

For a dedicated sniper, Raijin and Springchester, modded into different elements and fitted with explosive ammo mods can carry the player all the way to the end-game. Just don`t forget to pack something with area effect or some dakka to deal with minor enemies. For distractions like Ratverine or Dynomite, Raijin is both inconvenient and an overkill. 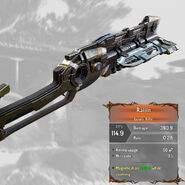 Raijin concept art
Add a photo to this gallery
Retrieved from "https://shadowwarrior.fandom.com/wiki/Raijin?oldid=10048"
Community content is available under CC-BY-SA unless otherwise noted.