Razorback is a part of pre-order DLC, which player can find in Wang Cave. This weapon is a combination of chainsaw like Warrrsaw! and regular katana - player can use skills like Sting and during regular attacks it "bites" into enemy instead of simply cutting him. Ammunition is renewable.

The use of Razorback is somewhat nuanced. It`s one of the best options for a one-on-one melee combat due to it`s tendency to "bite" into enemy even on basic attack, delivering obscene amounts of damage. Several successful hits is all that is necessary to reduce absolute majority of enemies into bloody chunks on the floor.

However, this biting nature can be a liability in the brawl, because while you`re sawing one enemy in half, others will bite your back. Using Vortex does help to clear out the crowd, but if you`re beset by several strong enemies at once, strategic retreat to employ some kind of ranged weapon might be a better idea.

Vanish skill has a terrifyingly effective synergy with this chainsword, provided you have the chi up to the task of several consecutive vanishes back-to-back. 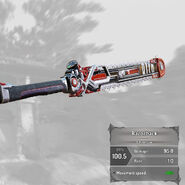