"Behold, the Zilla Labs Chi Chainsword. All the power of a chainsaw. All the finesse of a Chi-tana."
—In-game description.

Saw Blade is a variation of Razorback imbued with Ki technology. Player will receive this weapon for killing champion called Queen of D.O.L.L.s in Flirty Fishing, part III. Ammunition is not renewable, but can be increased up to 1200.

Saw Blade is the most effective chainsaw-type weapon met in game. It is very useful against lesser demons or during suprise attacks, as special skills like Sting allows Lo Wang to "bite" into enemy instead of simply hitting them.

However, player should remember that rarely this weapon acts like a regular katana.

Saw Blade in the game 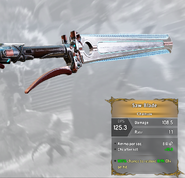 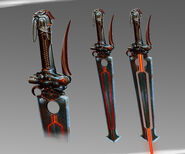 Saw Blade concept art
Add a photo to this gallery
Retrieved from "https://shadowwarrior.fandom.com/wiki/Saw_Blade?oldid=10199"
Community content is available under CC-BY-SA unless otherwise noted.