"This artisanal, handmade automatic grenade launcher may look like it was made in Brooklyn, but it comes from right here, in Onishima."
—In-game description.

Dropped from the Lord Destroyer boss in the mission All in the Family. This is one of the weapons that are easy to miss, since there is no free-roaming option for this mission and the location is left abruptly after conversing with Mezu.

The weapon bonus increases fire rate by 40% for 10 seconds on 3 simultaneous kills.

Sheng-Long comes with a proprietary frost mod, though it can be removed. Rate of fire, damage radius and secondary effects of cold element all lend themselves well to making this weapon a crowd-controller, and the damage is high enough to offset the drawbacks of shallow ammo pool. 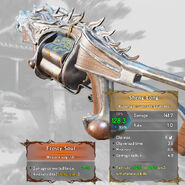 Sheng-Long stats
Add a photo to this gallery

Retrieved from "https://shadowwarrior.fandom.com/wiki/Sheng-Long?oldid=13093"
Community content is available under CC-BY-SA unless otherwise noted.