"Looks archaic, but is cheap as hell and only sometimes explodes in your face."
—In-game description.

The Shogun is pump action shotgun appearing in Shadow Warrior 2.

Drops from Old Fart - a champion version of Belly in the first part of Flirty Fishing.

Same deal as with other pump-action shotguns. Slow rate of fire, serious damage. Shogun has the smallest clip out of pump-action shotguns - only five shells, however with it`s special effect being double damage with the last shell in the clip, it is less of a drawback then one may think. It fires and reloads slightly faster then Hauer and offers better damage per shot, making it a viable alternative once it becomes available - but damage radius and miss rate prevent it from being clearly superior choice.

Modding critical damage is a good idea. Other good ideas may include adding charge shot mode, if player is good at aiming and vanishing and has patience for ambush playstyle.

Bad idea is to put a doubled ammo mod on the Shogun - due to clip holding an odd number of shells, doing this prevents the special effect from ever activating. 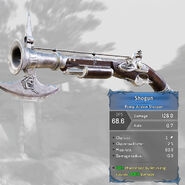 Shogun concept art
Add a photo to this gallery
Retrieved from "https://shadowwarrior.fandom.com/wiki/Shogun?oldid=13106"
Community content is available under CC-BY-SA unless otherwise noted.