70% Damage converted into Force Slash when there is ammo

The Shredders are melee weapon appearing in Shadow Warrior 2.

Drop from Captain Lo-Gan in the side mission One More Thing or a mission reward from the second part of Heisenberg. The weapon will convert 70% of damage into a Force Slash when there is ammo.

Same deal as with Plasma Cutters, but claws. Expends plasma, slashes enemies from afar. Can also be used in close-quarters combat. Plasma Cutters have a bit better damage per swing, but Shredders are faster. 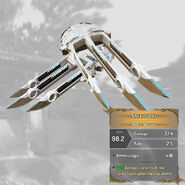 Shredders concept art
Add a photo to this gallery
Retrieved from "https://shadowwarrior.fandom.com/wiki/Shredders?oldid=13618"
Community content is available under CC-BY-SA unless otherwise noted.