"I love the shuriken!"
—Lo Wang, after selecting shuriken.

Shurikens are thrown in volleys of 3, and good at dispatching ninjas from both close to medium range. Evil Ninjas brown variant sometimes drop packs of them, and you can recover ones stuck in walls by running up and tapping use on them. The only real benefit is that they can be thrown accurately at long ranges, provided your target is stationary. Lo Wang can hold up to 99 Shurikens at a time.

In the reboot, Shuriken are used as the last resort ranged attack or to temporarily stun enemies fast. Also, differently from the Classic, Shurikens can't run out and are infinite.

Shurikens are useful when destroying armed Sticky Mines or when running out of ammo on other weapons. 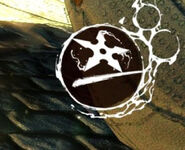