The Duke is automatic grenade launcher appearing in Shadow Warrior 2.

Reward for completing side mission The Cookery.

The first automatic grenade launcher the player can get their hands onto. While it`s a decent crowd control tool, One-Trick Pony becomes available in the same time, if not earlier, and The Duke just does not compare well to it. Higher fire rate would have made it a viable alternative, but even with capacity upgrades, player can not carry enough grenade ammo to make spray and pray a good option with this ammo type.

In the absence of other grenade launchers, however, it will do, particularly if equipped with sticky ammo mod. 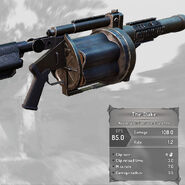 The Duke stats
Add a photo to this gallery
Retrieved from "https://shadowwarrior.fandom.com/wiki/The_Duke?oldid=13220"
Community content is available under CC-BY-SA unless otherwise noted.