"Old fashioned but deadly as ever, equip it with Chi-power upgrades and send your favorite monster a poison rocket sandwich."
—In-game description.

A possible reward for the second part of side quest Flirty Fishing. However, Larry also sells it, and it might actually be available for sale before you even get around to taking the side mission in question. If that happened and you bought it, Gozu will simply hand out MG Triple-6 on completion (or not even mention TLKG as a possible reward if you bought it before taking the mission at all).

It`s a rocket launcher. Blow everything up with it. Seriously. It boasts very generous helping of fiery death per rocket. (Getting comparable performance out of Monsoon requires triple barrel multishot mod and corresponding rocket expenditure, or some very high-end damage-raising mods AND charged shot mod.)

Do keep in mind that reloading is pretty slow, so plan your strike well or be prepared to switch over to another weapon to mop up the stragglers. Or, if you`re in boss fight, take advantage of dashing or vanishing to give you time and space to reload your weapon. 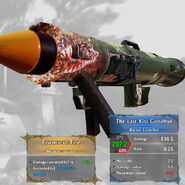 Ditto
Add a photo to this gallery
Retrieved from "https://shadowwarrior.fandom.com/wiki/The_Last_Kiss_Goodbye?oldid=13332"
Community content is available under CC-BY-SA unless otherwise noted.