"This shotgun splatters ho Chi energy all over your enemy's face. Messy, but satisfying."
—In-game description.

The Purgator is a pump action shotgun appearing in Shadow Warrior 2.

The Purgator is given as a reward for completing the second part of side quest Heisenberg.

The weapon bonus gives 20% chance to restore 50% ammo in clip on kill.

Pump-action chi-tech shotgun using energy as an ammo pool. Very valuable addition to arsenal, if you`re a fan of shotguns. A pity this addition is relatively late in game. Still, even when it is, it`s pretty relevant kind of addition.

Using energy gives this shotgun more staying power then ones using regular ammunition, and special bonus of replenishing half a clip every now and then further aids this. Damage output is not the highest, but both rate of fire and clip size aid this problem.

Although it`s pump-action, Purgator actually has two barrels and therefore can be modded to fire both barrels at once. In that configuration, Purgator is a very effective crowd control tool. Giving it ice modifications can improve the capability further, allowing it`s blasts to slow down whole hordes at once. 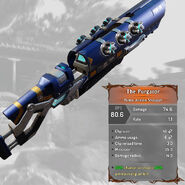 The Purgator stats
Add a photo to this gallery
Retrieved from "https://shadowwarrior.fandom.com/wiki/The_Purgator?oldid=13222"
Community content is available under CC-BY-SA unless otherwise noted.