Toros are rather frequently-encountered, but quite formidable to fight. They can land multiple blows in a single attack by swinging their staves in circular motions, and even throw them as projectiles. Due to the size of their staves, they can very easily block some of Lo Wang's attacks, so long as they aren't in the middle of an attack themselves. Additionally, when charging, they can summon a spectral shield that (presumably) absorbs incoming attacks, and can perform lunging attacks, much like Hammerheads.

There is a Champion version of this unit called Sanctuary Guardian. It is a first champion met in game and is accompanied by a few Hammerhead's.

Toros wear samurai-like armor with crescent on the helmet. Their visible skin is heavily disfigured. They carry double-bladed staves as weapons.

Toros are quite damaging and formidable but are fairly slow and sluggish enemies. They leave themselves wide open following their attacks, making it advisable to attack them while they recover. While they charge the player, they project a shield, making them immune to damage from the front. They can easily be parried due to their slow attacks, making it advisable to do so.

A Toro in the announcement trailer.

Lo Wang blasting a whole through a Toro with a Hauer in an official screenshot. 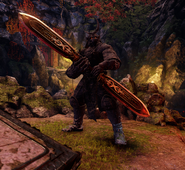