"For those that like to get up close and personal, this tomahawk and dagger comes as a set."
—In-game description.

The True Patriot is a melee weapon appearing in Shadow Warrior 2.

Randomly dropped from the chests. Can be found relatively early, but no guaranteed drop spots.

A set for true indians. If you`re not a true indian... well. Other then aesthetics, there`s nothing special about those short blades. 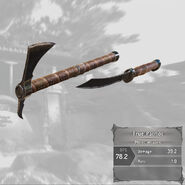 True Patriot stats
Add a photo to this gallery
Retrieved from "https://shadowwarrior.fandom.com/wiki/True_Patriot?oldid=13175"
Community content is available under CC-BY-SA unless otherwise noted.