Uzi is an SMG type weapon appearing in Shadow Warrior Classic and its expansions, Wanton Destruction and Twin Dragon.

Alongside the Riot Gun, Uzi's are primary weapons for dispatching enemies in the game. Upon picking up another Lo Wang will start to duel-wield the Uzi's. But power comes at a cost, as the guns will eat up ammo at a much faster rate.

Uzi's are for mid to close range combat, and while it might feel like you could fire them in controlled bursts to hit more distant targets, the cone of fire for the weapon is the same whatever you try to fire a few shots or unload a clip, although with this said two Uzi's have a larger cone of fire then just one.

Uzi is best to use when fighting Evil Ninjas, Coolies and their ghosts. Be advised that they need to be reloaded after 50 rounds or 100 if duel-wielding, and while reloading one might only take a second, reloading two in the middle of a firefight can take way too long. 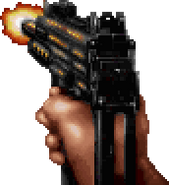