"The standard issue weapon for ZillaCorps during the Collision, these conventional weapons have mostly found their way into civilian hands. Its high rate of fire makes it a perfect pest control tool."
—In-game description.

3.0% chance to drop some zillyen on hit

The Wang Touch is a submachine gun appearing in Shadow Warrior 2 as pre-order bonus.

A starter weapon if pre-order bonus is earned, replaces Sidekick. It`s worth to note that Sidekick can still be purchased from Larry’s Shoot Shack later.

Surprisingly, it`s probably the best submachine gun available. It has same capacity as Sidekick, but better damage and lower rate of fire, making both firing and ammunition expenditure more controllable Everything aforementioned is even more acute in comparison with Einhänder.

Still not exactly on par with assault rifles in the same class, but has the dubious advantage of being suitable for dual-wielding mods. Beware, as dual-wielding any submachine gun will deplete medium bullets at alarming rate. 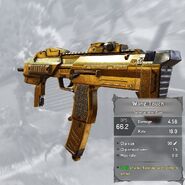 Wang Touch stats
Add a photo to this gallery
Retrieved from "https://shadowwarrior.fandom.com/wiki/Wang_Touch?oldid=14164"
Community content is available under CC-BY-SA unless otherwise noted.