Wanton Destruction is an expansion to Shadow Warrior Classic. It was created by Sunstorm Interactive and tested by 3D Realms, but was not released by the distributor. Charlie Wiederhold presented the four maps he created to 3D Realms, and was consequently hired as a level designer for Duke Nukem Forever. With permission, he released the maps on March 22, 2004. On September 5, 2005, Anthony Campiti - former president of Sunstorm Interactive - notified 3D Realms by e-mail that he found the Wanton Destruction add-on, and it was released for free on September 9, 2005.

The game features 12 new levels, new artwork and a few new enemy replacements, such as human enemies; though they still act like their original counterparts.

The add-on chronicles Lo Wang's adventures after the original game. He visits his relatives in USA, but is forced to fight off Zilla's forces again. The game culminates with a battle against Master Zilla above the streets of Tokyo, which ends with Master Zilla's death.

Two quotes were recorded by John Galt and added to normal gameplay. 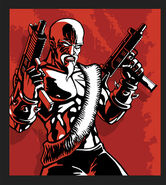 Redux artwork for Wanton Destruction
Add a photo to this gallery

Retrieved from "https://shadowwarrior.fandom.com/wiki/Wanton_Destruction?oldid=14188"
Community content is available under CC-BY-SA unless otherwise noted.