Whisperers are magical clay golems that are used to gather parts of Nobitsura Kage in Shadow Warrior (2013).

Originally created by Hoji to strip of his memory of Ameonna, Whisperers act as couriers for the Nobitsura Kage parts. The Ancients and any other shadow beings for that matter, cannot touch the Nobitsura Kage as just touching the weapon can kill them, but since Whisperers aren't truly alive, they can touch the blade therefore acting as couriers for them. The golem is made of entirely of clay. In place of a heart, Whisperers contain a memory that one of the Ancients, the immortals that rule the demons, chose to sequester away. Their faces share similarity to Ameonna's face. This enraged Enra and according to Mezu this was because he believed that a simple clay golem can't have a face that one of Gods (Ancient).

After Ameonna breaks Hoji's heart, Hoji creates the Whisperer to strip his memory of this act. After she is poisoned and seeing that only the death of an Ancient can revive her, Enra searches for the Nobitsura Kage, the only thing in existence which can kill an Ancient. Because demons can't touch the blade, he uses Hoji's created Whisperes as couriers for the blade. Each of the brothers of Ameonna, sacrifice their memories of her to the Whisperers, to fuel them.

Whisperers are encountered by Lo Wang through out the game. By slaying these golems, Wang absorbs their memories and learns of the game's back-story.

Whisperer in the game 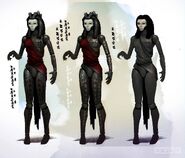 Whisperers concept art
Add a photo to this gallery
Retrieved from "https://shadowwarrior.fandom.com/wiki/Whisperers?oldid=12922"
Community content is available under CC-BY-SA unless otherwise noted.