"I never meant for it to happen like this, sister. I always believed my time would come. That I, Xing would replace Enra and rule the Shadow Realm."
—Xing in his Whisperers memory.

During the battle with the Evildoing Dragon, Xing and his armies were crucial in pushing their mortal enemy into the void. In order to prevent him from invading their realm ever again, his brother, Hoji was hired to create a set of gates to seal them off. They then used the soul of their sister, Ameonna to seal the gates. But they still relied on the power of the dragon by using Ameonna's tears to fuel their realm and their own desires.

After Enra found out of Hoji's and Ameonna's affair, Xing together with his brothers, under orders of Enra, separates the pair and skins Hoji's face as punishment. Later, Hoji offers a plan to Xing in which he would bring a tainted potion to Ameonna, which would draw Enra to the temple so that Xing could overthrow him and rule the Shadow Realm in his stead. Xing accepts and after poisoning Ameonna, which attracts Enra as planned, Xing tries to kill him.

Unfortunately to Xing, Mezu stops him and saves Enra. Xing was then beheaded by Gozu on Enra's orders for his role in the plot, which didn't kill him because Ancients are immortal. Later, Enra lets Xing to get rid of this memory by sacrificing it to the Whisperer. His body on the other hand is used by Enra as a puppet for his plans.

At the start of Chapter 15, Lo Wang finds Xing's head. Xing, missing the memories of Hoji and his involvement in the plot to overthrow Enra, helps Lo Wang to find Hoji's laboratory. Xing reveals that Enra started to use his body as a puppet for his needs. Before entering Hoji's laboratory, Xing asks Lo Wang leave him behind because he doesn't want to get involved in his families drama again. Lo Wang complies and leaves his head on a rock.

After the events of Shadow Warrior (2013), Xing started to work for Zilla as a broadcaster inside the Zilla City. Lo Wang meets him, when he goes to find Kamiko's notes. After some convincing, Xing gives the location of the drives containing Kamiko's notes.

He later gives the location of corrupted Kamiko's body and explains the purpose and origins of Outer Gates. Xing also opens the entrance to Zilla's HQ. Later, he arrives together with Zilla at the Outer Gates and witnesses as Kamiko seals open the gates. She then proceeds to fly to the gates, shattering them in the process. Out of the gates, the Evildoing Dragon emerges, and then tries to swallow Lo Wang.

According to Lo Wang, after the Evildoing Dragon is released from the Outer Gates, it kills all the Ancients, including Xing for trapping him and stealing his power.

Before the events of Shadow Warrior Xing was ambitious and lusted for power Xing always believed that someday he will rule the Shadow Realm instead of Enra. After his plan fails, he expresses regret that he hurt Ameonna as Xing never wanted to hurt her. He feels contempt against Mezu, for stopping his plot to kill Enra. During his meeting with Lo Wang, Xing seems to be tired of his family drama and doesn't want to get involved. He even asks a favor of Lo Wang, to chopped his body into bits, showing that he doesn't feel any emotional attachment to his beheaded body anymore.

Continuing the trend from last game, Xing is now not only the friendliest Immortal, but he's also a cheerful friend of Lo Wang who actively exchanges banter with him, a far cry from the brute who poisoned Ameonna a long, long time ago.

Xing's beheaded body mostly uses AOE smash attacks with his club and tries to stomp on Lo Wang if he gets under him. If Lo Wang is too far away, Xing's breastplate will open, sucking him closer to Xing. A good strategy is to use upgraded rocket launcher and aim for middle of his body, to count as hits on all of Xing's body. This will lower all the vulnerable parts of his armor at same time, making the fight much easier.

Xing had a beard and two goat-like horns. He wore plated samurai armor. Xing's original battle armor had yellow burning core on the chest piece, a giant crescent on the back of the armor and a helmet. As the other battle armors, it had hoofs and also carried a giant club for a weapon. Xing's beheaded body armor stays the same except for the chest piece, which is now looks like a face and has an opening piece, which serves as a mouth.

In Shadow Warrior 2, Xing's head was crafted into a Floater Drone. The drones outer case color is changed from standard white to red. 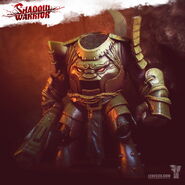 Xing boss in the game 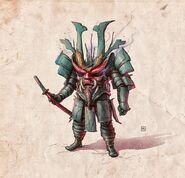