"The Yakuza are simple. They like to drink and they like to kill things. Imagine Gary Busey with a fashion sense."
—In-game description.

Yakuza is a criminal organization featured in Shadow Warrior 2.

The Yakuza are members of the various organized crime families making up Japan. They deal in illegal industries, such as drugs, prostitution, and arms trafficking.

Yakuza Assassin – The most basic Yakuza member, armed with a single submachine gun. They have very low health, but deal deceptively high damage. Melee weapons are very effective at dealing with them, as they can quickly hack off limbs.

Yakuza Desperado – A more powerful version of the Assassin. They dual wield and have slightly more health, but are otherwise unremarkable. Melee weapons continue to remain effective.

There is a champion version of Yakuza Desperado called Gun Fury. Player may meet this enemy during side mission Demon Trafficking.

Yakuza Fencer – A sword-wielding Yakuza member who can jump very high to chase down Lo Wang. They can sometimes block your melee attacks but are otherwise very weak. Ranged weapons are more effective at dealing with them. They have a ranged attack in the form of a beam projectile that travels from their sword, but it is very weak and easily dodged.

Yakuza Warrior – A more powerful version of the Fencer that dual wields swords. They are more formidable at melee range but remain weak to gunfire.

There is a champion version of this type of Yakuza warrior called Apprentice of Musashi. Players will meet this enemy during story mission Ancestral Ties. 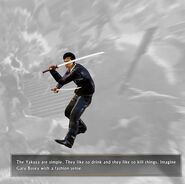 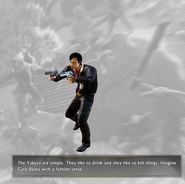 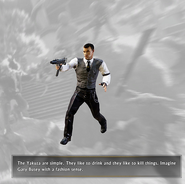 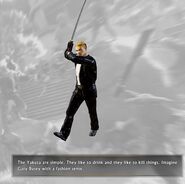 Apprentice of Musashi
Community content is available under CC-BY-SA unless otherwise noted.
Advertisement